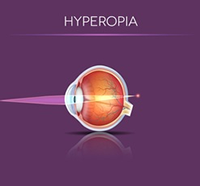 Hyperopia, also known as hypermetropia, meaning “beyond measure”, is a common vision problem, affecting about one-fourth of the population. Basically, hyperopia involves the inability to see objects up-close for tasks such as reading or detail work, and often being unable to see objects at a distance, things far away, like street signs.

In the normal eye, your cornea focuses light rays directly on the retina, resulting in clear vision without correction. In hyperopia, or farsightedness, your eye is shorter than normal. This shortness causes light rays to culminate at a point in beyond the retina (see picture).

Generally, children are born with hyperopia, but most of them outgrow it as the eyeball lengthens with normal growth. Even if it continues, this condition is usually undetected until later in life because the young eye is able to compensate for the hyperopia by contracting the internal crystalline lens of the eye, thereby pulling the focus point forward onto the retina.

High levels of hyperopia pose a special concern. The neurological-motor function feedback system, which tells the crystalline lens to add focal power, also tells the muscles that turn the eyes in and out to turn inwards. The brain functions as an “if/then” computer and assumes that for a given focal effort, the eyes should be aimed at a given point in space ahead of the viewer. Excessive focusing yields excessive convergence (turning in) of the eyes, resulting in eyestrain, headaches, double vision, and general discomfort.

In children, this sometimes results in crossed eyes (accommodative esotropia), loss of depth perception, difficulty reading and problems concentrating on near vision tasks.

Generally, but not always, hyperopia is caused by a shorter than normal eye. It can also be caused by three other factors, either in combination or alone: a too deep anterior chamber, a too flat cornea, or a weak powered crystalline lens. For our purposes here, we will address primarily the length of the eye.

Imagine your hyperopic eye is a very short movie theatre:

Because your theatre is very short, the picture is being projected way past the screen, instead of onto it. The picture appears out of focus because the screen is much too close.

A factor further complicating the situation is the aging of the human eye. Beginning around age 25 and symptomatic by age 40, the normal flexibility of the crystalline lens, which controls focal power, decreases. The compensatory mechanism fails and even small amounts of hyperopia result in blurred near vision, and later blurred distance vision.

People often confuse this with presbyopia, the condition where the crystalline lens loss of focal power causes a need for near vision correction. You may hear “you get farsighted as you get older – so if you’re nearsighted, your vision gets better.” This is not the case. If you start out myopic, you stay myopic. You might not need reading glasses for a longer period of time, but you will eventually need them. If you start out hyperopic, you need help with reading vision sooner, and ultimately require vision correction for distance as well.

To correct hyperopia, LASIK increases the steepness of the cornea in order to compensate for the lack of space. This is like having a stronger lens in the projector to focus the image forward so that it can then sharply in focus on the screen.