Astigmatism occurs when the cornea is shaped irregularly – like a football or a spoon as compared to a ball or sphere. The visual effect is similar to what you may have seen in a “funny mirror” at an amusement park – the image is stretched, usually horizontally or vertically, although oblique (angular) distortions also occur.

Your eye is a dual lens system, one external and one internal. The external lens of the eye is the cornea. Normally, the cornea is shaped like a somewhat flattened ball, with its meridian along the horizontal.

The internal lens, called the crystalline lens, is convex on both sides (front and back), like this: (). This lens is also somewhat flattened, but its meridian is vertical. 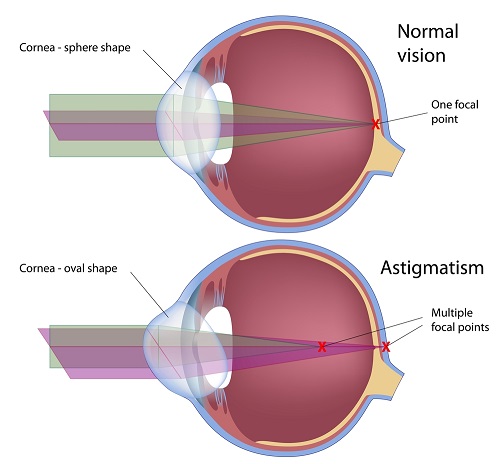 In a perfect system, the cornea and lens each contain the same amount of curvature, but are opposite in orientation, thereby effectively canceling each other. Because of this, the rays of light can flow in even, parallel lines.

Sometimes, one of these two lenses may have a radius of curvature that is too steep in one meridian, and therefore too flat in the corresponding perpendicular meridian. Generally, this astigmatic optical error is caused when the cornea has excessive flattening (or steepening) in one meridian, rather than the internal lens. Then, the rays of light are distorted.

There are various types of astigmatism including regular, mixed and irregular astigmatism, also referred to as higher and lower aberrations, depending upon the degree of steepness and flatness involved and in what combinations. As the relative amount of error increases, so does the perceived blur and eye strain.

Small degrees of astigmatism do not significantly impact the visual system, as there is a built-in compensatory mechanism. Treatment

Astigmatism can occur alone as the sole optical error, and can be corrected by LASIK, or a lens (eyeglasses or contact lens) that is the astigmatically warped opposite to that of the eye.

Prescriptions having three parts indicate the presence of astigmatism and look something like this:
-3.00 +1.25 x 180

The first part indicates the main spherical correction (either myopia or hyperopia), while parts two and three show the extent and location of your astigmatism.