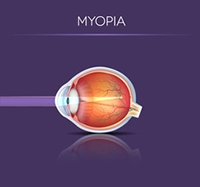 Myopia, or nearsightedness, is a condition of the eye in which images are formed in front of the retina, resulting in a blurred image.

Myopia is experienced by approximately one-third of the population and basically involves the inability to see objects at a distance, things far away like street signs, but usually being able to see objects up-close for tasks such as reading or detail work.

In the normal eye, your cornea focuses light rays directly on the retina, resulting in clear vision without correction. In myopia, or nearsightedness, your eye is longer than normal. This extra length causes light rays to culminate at a point in front of the retina (see picture).

A person with myopia normally develops it between the ages of eight and 12 years, and almost always before the age of 20. This myopic drift typically stabilizes in adulthood.

Generally, but not always, myopia is caused by a longer than normal eye. It can also be caused by three other factors, either in combination or alone: a too shallow anterior chamber, a too steep cornea, or a too strongly powered crystalline lens. For our purposes here, we will address primarily the length of the eye.

Imagine your myopic eye is an extra long movie theatre:

Because your theatre is extra long, the picture can only be projected a little distance past the seating, instead of onto the screen. The picture appears out of focus because the screen is too far away.

Some people with myopia can use this to their advantage somewhere after the age of forty, to read without glasses at an age when other people must wear reading glasses, due to presbyopia.

To correct myopia, LASIK makes the cornea less steep in order to compensate for the extra length. This would be like spreading (flattening) the seating out in your theatre, in order to shorten the room, and move the screen closer to the picture – it optically shortens the distance.