This is BIG NEWS!

Wavefront mapping is the most amazing breakthrough diagnostic tool for measuring the refractive error of eyes to come along in years. With this technology you may now have fully customized vision. For some, this may mean moving beyond 20/20 vision!

For the first time in medical history, we now have access to technology capable of revealing exactly how your optics system processes light. A newly developed, sophisticated piece of diagnostic equipment called the WavePrint identifies and measures imperfections in an individual’s eye twenty-five times more precisely than previous methods – that’s astounding!

This is a dramatic step forward in our pursuit of perfect vision. Previously, we were limited to only a few basic measurement of the eye. Now, wavefront mapping gives us an actual ‘fingerprint’ of the entire visual system, not just the shape of the cornea.

Like a fingerprint, your eyes are unique to you. Wavefront measures the way light travels through your eye and compares it to the way light would travel through a “perfect” eye. This determines the distortions of your eye and creates a prescription that Dr. Seibel will use to plan your procedure.

Dr. Seibel and his team offer LASIK eye surgery to the Los Angeles, Santa Monica and the Beverly Hills areas.

Why Wavefront LASIK is important.

Nearly 60 million Americans today suffer from poor vision, all because of the eye’s inability to focus light precisely on the retina due to a collection of structural defects, called aberrations.

The most basic structural defects are based on sphere, which is responsible for nearsightedness and farsightedness, or cylinder, which refers to regular astigmatism. These are all known as lower-order aberrations.

These lower-order aberrations can be corrected with traditional glasses, contact lenses, and LASIK. However, if measured by using the typical phoropter (the adjustable machine in most eye doctor offices – pictured here), thousands of individuals will mostly likely end up receiving the same prescription.

The degree of correction for lower-order aberrations is measured as a quantity – how much of the chart can you see at a distance, with 20/20 vision considered normal. In its simplest form:

However, there is a second category of optical defects, called higher-order aberrations. These irregularities in the structure of the eye affect the quality of vision, primarily details, causing such problems as contrast sensitivity. 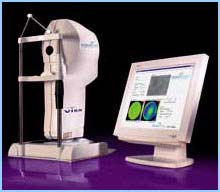 Now we have diagnostic power over irregular astigmatism as well as sphere and cylinder. We have the ability to map precise levels of these higher-order aberrations using such innovative powerhouses as the VISX CustomVue Wavefront Analyzer at Seibel Vision Surgery.

What is the goal of Wavefront LASIK?

The goal of wavefront controlled LASIK is to develop a plan that improves the overall quantity and quality of vision. The plan goes like this:

At its very basic, wavefront mapping uses a simple technique. It takes only a few minutes to complete and is absolutely painless. No medications or eye drops are required. You stare ahead at a field and focus on an object. While doing so, a beam of light is projected into your eye. This light is reflected off the back of your eye and out. 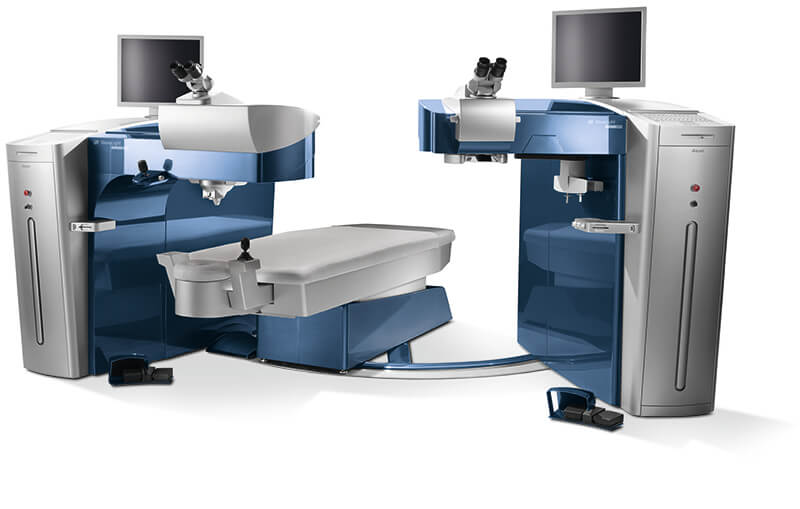 For your LASIK procedure, a more sophisticated version called the WavePrint uses a computer to convert the information into a highly individualized prescription. This prescription is transferred electronically to the computer that controls the VISX S4 excimer laser, which then calculates how and where it will affect the cornea. Dr. Seibel then uses this information to perform your actual surgery.

What is the value of Wavefront?

The wavefront system, as it is now used, was developed by VISX, Inc. (VISX.com), the world’s largest manufacturer of excimer lasers and was produced specifically for LASIK . Possibly the most promising aspect of its wavefront technology is the ability to help us identify individuals who are not ideal candidates for LASIK , as well as individually customize the procedure for those patients who are.

Wavefront mapping is a giant leap in refractive techniques. Traditionally, glasses/contacts are measured in 0.25 diopter steps, whereas wavefront measures to 0.01 diopters.

No two eyes are alike. Just like fingerprints and DNA, each eye has its own unique characteristics. Now, with wavefront technology, Dr. Seibel can develop a customized LASIK vision plan exclusively for you.

Custom wavefront-guided LASIK can provide a new level of accuracy and precision, never before seen. Studies show the possibility will now exist for individuals to see beyond 20/20 vision after LASIK surgery.

A FDA clinical study presented at the 2003 American Society of Cataract and Refractive Surgeons (ASCRS: ascrs.org) revealed that after a year following wavefront-guided LASIK :

Nearly 80 percent had either the same or better post-op vision without glasses than their best pre-op visual acuity with glasses or contacts.

Where did Wavefront come from?

The wavefront map is derived from technology first developed to correct distortions of light waves from space. This allowed researchers to accurately view images of stars and planets.

1994 – The first wavefront mapping of the complete aberration
profile of a human eye was performed.

2002 – The FDA approved the first commercial use of wavefront
LASIK to correct nearsightedness.

Who is a good candidate for Wavefront LASIK?

Normal LASIK candidacy criteria will continue to apply. These include being 21 years or older, having a stable prescription for at least a year, plus other medical criteria.

What is the “VISX WavePrint System”? 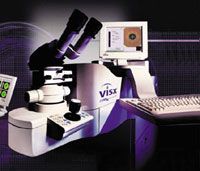 The VISX WavePrint System will provide you with unparalleled accuracy and exceptional personalized LASIK treatment.

There are 3 parts to the VISX WavePrint System

Dr. Seibel was one of only 13 doctors who was chosen by VISX to participate in the original FDA investigation for the validation of this technology in the United States.

He was also the first eye surgeon in Los Angeles to offer the combined technologies of bladeless, all-laser LASIK with IntraLase and VISX CustomVue Wavefront Ablation.

The new wavefront procedure provides unparalleled safety. The VISX Star S4 laser is the already the most highly tested laser in America for LASIK eye surgery. Its sophisticated three-dimensional eye tracking capability helps makes sure the prescribed LASIK treatment occurs as planned, instead of being altered slightly by inadvertent eye movements.

Because wavefront LASIK utilizes the same surgical process as traditional LASIK , you can have the reassurance of more than several million LASIK surgeries having been performed successfully.

How much does Wavefront LASIK cost?

Overall, wavefront LASIK is more expensive that standard LASIK procedures. Customization requires more technology, more expertise, and more time. It is not unlike purchasing a good suit. You could purchase ‘off-the-rack’ or have one ‘custom-fit’ to your individual needs.

Will Dr. Seibel depend on me for anything?

While it is true that wavefront technology can accurately ascertain one’s prescription (both lower- and higher-order aberrations), it is currently unable to do so in a small subset of patients. For these individuals, we still have to rely on the subjective testing of “which is better 1 or 2”. In addition, even though the LASIK treatments are auto-centered and pupil-tracked under Dr. Seibel’s guidance, it is still necessary for you to maintain good fixation on the red, blinking light during treatment.

I have already had LASIK. Can Wavefront help me?

Customized wavefront-guided ablation is producing some of the best-uncorrected visual results ever achieved with refractive surgery, according to the latest findings from international clinical trials presented at the XX ESCRS Congress.

Remarkably, many patients achieved better-uncorrected vision postoperatively than with correction before the procedures. At the six-month follow-up point, 41% of eyes showed better UCVA than the preoperative BCVA. Refractive stability was reached after one month in 96% of eyes and remained stable thereafter.

Predictability was also good. A full 94% of eyes were within 0.50 D (diopters) of intended correction at six months. Some 70% of eyes had either a decrease in high order aberrations or a change of less than 0.10 microns. None of the eyes lost more than one line of BCVA.

Under night vision conditions, patient satisfaction levels were more modest but better than before the procedure. Some 86% were satisfied or very satisfied; 6% were not sure; and 7% were somewhat dissatisfied compared to 23% preoperatively.

When asked about night vision and glare, 76% said they were satisfied; 16% were not sure; 7% somewhat dissatisfied; and 1% were dissatisfied. These results again compare favorably to preoperative values of 24% and 4%, respectively.

The frequency of patients who never or very rarely reported halos improved from 74% preoperatively to 86% at the six-month mark.

A total of eight practices, located in specialist clinics in Europe (Germany, Spain and UK), South America (Chile and Colombia) and Asia (Korea and Taiwan) participated in another study.

The amalgamated results paralleled those seen in the United States study above. One week after the procedure, 84% of patients saw 20/20 or better and more than half (57%) saw 20/16 or better.

No sight threatening complications were reported.

The correlation among these studies performed by various skilled surgeons worldwide is a strong testament to this technology’s capability and consistency.

Now that you know all about the Wavefront LASIK alternative procedure, schedule a LASIK consultation with our team of LASIK Surgeons. With an office in Los Angeles, Seibel Vision proudly serves the surrounding Santa Monica and Beverly Hills areas with premier LASIK services.