Glaucoma is one of the leading cause of blindness throughout the world, affecting approximately 2% of the population over the age of 40. Glaucoma causes damage to the optic nerve – the pathway that carries the images we see to the brain. Left untreated, glaucoma eventually destroys the optic nerve and leads to permanent blindness.

Glaucoma affects an estimated 3 million Americans, with 120,000 blind due to the condition.

Often called the sneak thief of sight, glaucoma can destroy sight without causing any pain or obvious symptoms until it is too late. Thus, awareness and early detection of glaucoma are extremely important. This disease can often be successfully treated, and blindness prevented, when diagnosed early.

Glaucoma usually affects both eyes, but can progress more rapidly in one eye than in the other. Involvement of just one eye primarily occurs when glaucoma is brought on by factors such as a prior injury or the use of steroids in that eye.

Think of your eye as a water balloon attached to a faucet that is permanently dripping water. The balloon has a drainpipe that slowly filters the water out, at a constant rate, allowing the balloon to stay perfectly full without overextending it. If the drainpipe were clogged, the water would collect inside the balloon and over-inflate it, creating too much pressure. Eventually, the most fragile part of the balloon would become damaged and give way.

In your eye, the liquid is called aqueous humor and constantly flows in and out, not as a part of the tears on the outer surface, but rather coming from inside your eye and leaving through a drainpipe called the angle (because of its angular shape). If the angle becomes blocked, the volume of fluid inside the eye goes well beyond normal levels, putting too much pressure on the fragile optic nerve and damaging it.

This diagram is of the front part of the eye in cross section to show the filtering, or drainage angle. The angle is between the cornea and the iris, which join each other right where the drainpipe, called the trabecular meshwork, is located. The arrow shows the flow of the aqueous fluid from the ciliary body, through the pupil, and into the drainage channels.

Glaucoma can affect anyone. However, factors that increase a person’s risk generally include:

High pressure in the eye, resulting from problems with the eye’s drainage system, is considered the primary reason for glaucoma. However, even patients with normal eye pressure have been known to contract this disease.

The eye’s drainage system, which lies in-between the cornea and the iris, is called the angle, named for its angular shape. Therefore, you see the word angle in the different glaucoma names.

While there are many types of glaucoma, they primarily fall into two groups, differentiated according to whether the angle is open (able to accept fluid) or closed (fluid is blocked from entering).

With chronic open-angle glaucoma, the angle is open, but the fluid does not drain as quickly as it should because of something interfering with the meshwork, or filtering system. This causes internal pressure to build up gradually.

Closed-angle glaucoma occurs when fluid cannot escape because the drainage angle is closed off, which causes pressure to build up suddenly. This often causes noticeable pain. Acute angle-closure glaucoma is an emergency and should be treated immediately. 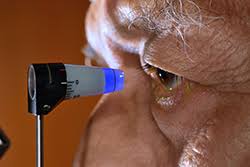 Routine screening eye examinations are mandatory because, in its early stages, glaucoma usually has no symptoms. In order to be controlled, glaucoma must be diagnosed early. It is a lifelong disease, so those afflicted must be compliant with their scheduled eye exams and with their medication regimens.

Some of these tests may not be necessary for every person. You may need to repeat these tests on a regular basis, to determine if glaucoma damage is increasing over time.

When should you have a glaucoma exam?

Although, once nerve damage occurs it cannot be reversed, glaucoma is a disease that can be controlled. Proper treatment can keep the intraocular pressure within normal range and therefore, prevent or retard further nerve damage and visual loss.

Eye drops are usually the first line of defense in treating most types of open angle glaucoma. One or more types of eye drops may have to be taken up to several times a day in order to be effective. These drops work either by reducing the production of the aqueous fluid (shutting off the faucet) or by increasing the drainage of the fluid out of the eye.

Laser surgery treatments may be effective for different types of glaucoma. The laser is usually used in one of two ways.

Each type of treatment has its benefits and potential complications. Dr. Seibel will be happy to go over them with you.