IntraLASIK has changed the way LASIK is performed – offering the safest, most precise vision correction available in the world today!

Dr. Seibel was the first eye surgeon in Los Angeles to combine the advancements of IntraLASIK and VISX CustomVue Wavefront LASIK. Together these two technologies offer a whole new level of safety to your LASIK procedure by providing an all-laser approach. 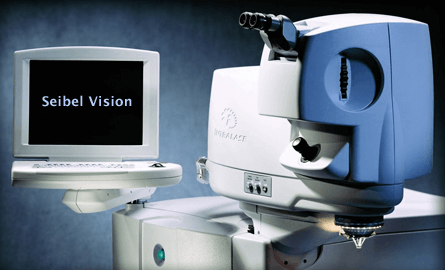 The IntraLase FS laser is the first technology for a truly all-laser, blade-free LASIK procedure, replacing the hand-held microkeratome blade historically used in creating LASIK corneal flaps — the first step of the procedure — with a computer-guided, ultra-fast femtosecond (fem-to-second) laser. The IntraLase laser virtually eliminates the majority of the most severe sight-threatening LASIK complications related to use of the microkeratome and, by creating an optimal corneal surface below the flap, provides for better visual outcomes — taking many patients to 20/20 vision and beyond! 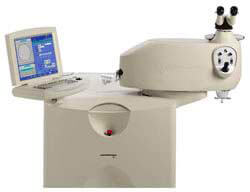 The IntraLASIK procedure requires the use of two lasers, providing an entirely new level of safety and precision in vision correction. While the IntraLASIK procedure continues to require a corneal flap, it is created with the a special rapid pulse laser called a femtosecond laser. The corneal flap is then lifted and the VISX Star S4 excimer laser is used to perform the actual vision correction.

Traditionally, the creation of a corneal flap, required in LASIK surgery, was performed with a mechanical, hand-held device (known as a microkeratome) that moved across the cornea to cut the flap (see animation left). Although mechanical microkeratomes are safe, they produce a meniscus-shaped flap of variable overall thickness and always thinner in the center than at the edges. Occasionally a corneal abrasion or an irregular, incomplete, or button-hole flap results.

A HUGE improvement in LASIK!

The IntraLase laser can make corneal flaps as thin as 100 microns, less than the thickness of a human eyelash. This may allow people with thinner and flatter corneas, who weren’t candidates for LASIK, to be able to undergo IntraLASIK.

The microkeratome is a razor-like device operated by hand or a motor. The blade slices off a portion into the cornea, leaving an uncut section to serve as the flap’s hinge.

Dr. Seibel feels that added safety is always worth the investment in technology. Studies have shown that the all-laser approach, utilizing the IntraLase IntraLASIK laser and an excimer laser, not only avoids microkeratome-related complications, but also offers the potential for better vision after LASIK.